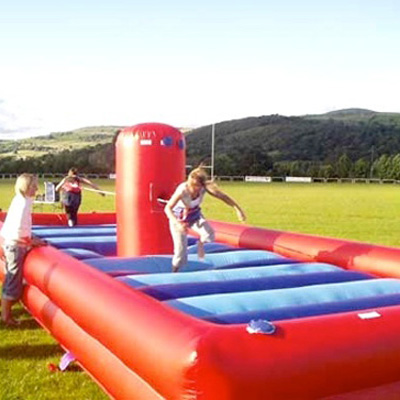 Bungee Eliminator hire in Cumbria with A & R Bouncy Castles. The eliminator is similar to our standard bungee runs except that the bungee cord passes through the centre wall and is attached to two participants, who then run against each other to collect all of the markers from the edge and return to the start pillar.

The first player to collect all the markers wins.

This may sound simple

Your opponent is attached to the other end of the same bungee rope, and is trying to do exactly the same creating a tug of war effect between you

The Bungee rope will only stretch so far before one of you gets bungeed backwards!

Hysterical fun for players and a game that always gets the spectators cheering.